Sword making during the Nambokucho Period is considered by many to have been at it’s pinnacle. During this time emerged many great swordsmiths. The most revered of these was Masamune, the student of Shintogo Kunimitsu. It was a transitional time in sword making. We start to see awe inspiring tachi, reaching their largest sugata of any period, previous, or later. We also see Soshu Den influences taking hold, combining sugata, with masterfully forged blades and wildly artistic temper lines. The forging method combining soft and hard materials and the expression of many beautiful chikei and kinsuji are the accomplishment of Masamune. Then he started tempering midare-ba based on notare in a large pattern which differed from midare-ba based on choji and gunome and tempered by the smiths of the former period, also nie is more emphasized that that of Yamashiro and Yamato swords. It seems that the combination of soft and hard materials was practiced before Masamune and such examples are seen in the works of Ko-Bizen.

Below is the famous Hocho Masamune Tanto.

Osafune Kanemitsu, was a shining star in the Bizen Province. His work shows the Soshu influence of Masamune, amalgamated with the Bizen tradition made famous by his father, Kagemitsu and his gumome hamon. Kagemitsu was indeed a Master of the Bizen tradition. His son, Kanemitsu went on to lead his own school that became the most famous in the Bizen province during the Nambokucho period. There is even fable about the sharpness of Kanemitsu’s swords.

Top students of the Kanemitsu school include Hidemitsu, Masamitsu, Morimitsu, Moromitsu, Motomitsu, Tadamitsu, and Tomomitsu, throughout the period. This sword is attributed directly to Osafune Masamitsu by the NBTHK. This attribution draws a close relationship to Kanemitsu because he is not only considered a top student, but possibly the son, or brother, of the Grand Master. His workmanship is quite similar to that of Kanemitsu.

Tanobe Sensei seemed to really like this piece, as evidenced by the lengthy description on the sayagaki. He calls this sword Chin-Chin, Cho-Cho, which means especially worthy of preservation. The doubling is to emphasize this piece’s historical significance. The Juyo Token rating means this sword is important. It received this rating despite minor flaws such as hakobore and rust pitting. This speaks volumes about this swords importance as an artifact.

Masamitsu has extant works from the Enbun to Oei Periods. His works span 40 years. There is a theory that there were two generations because of a change in working style, but Fujishiro thinks there is one. His style changes become a precursor for the Kozori School in the late Oei Period. It is important to note that Masamitsu is not considered of the Kozori School, but his work may have influenced, or been influenced by, this group. It seems like Masamitsu worked with many forms of Sugata in his career. He is noted for sakizori tanto and sunobi katana. He also made naginata, a type of long pole arm. This sword is in the form of naginata naoshi, or converted from naginata.

Samurai valued naginata naoshi as great weapons, as evidenced by their depiction in many Samurai theme woodblock prints. The sugata of this naginata naoshi is unusually large, even for the Nambokucho Period. Swords produced during this period had the grandest of sugata.

Masamitsu’s hamon is typically ko gunome, gumome choji, or kataochi with ashi. Sometimes hamon is sugaha, or notare based. The hamon of this naginata naoshi looks like that of Kanemitsu. One can see this comparison when looking at the “stooped shoulder” gunome hamon with utsuri and many fine hataraki.

The quality of this sword is evident, even under a magnifier. The jigane is excellent, something swords of the Bizen region were known for during this time. All of this is probably why this sword was chosen for the Samurai Exhibit at the Morikami Museum in 2014. It was part of an exhibit of some of the finest swords from private collections. 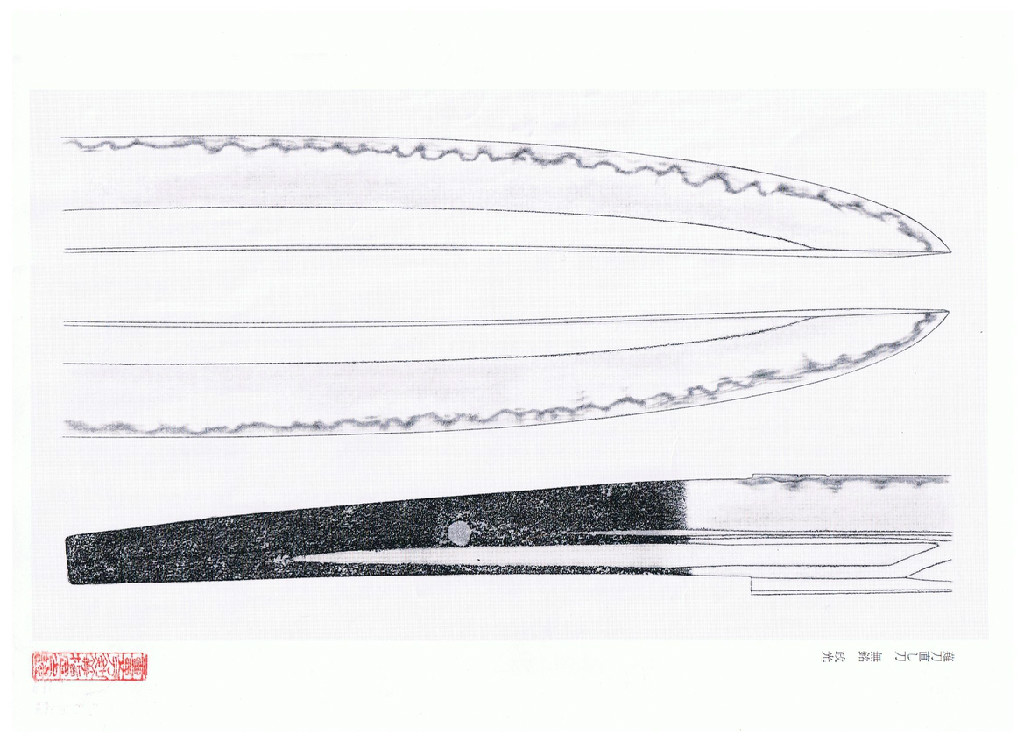 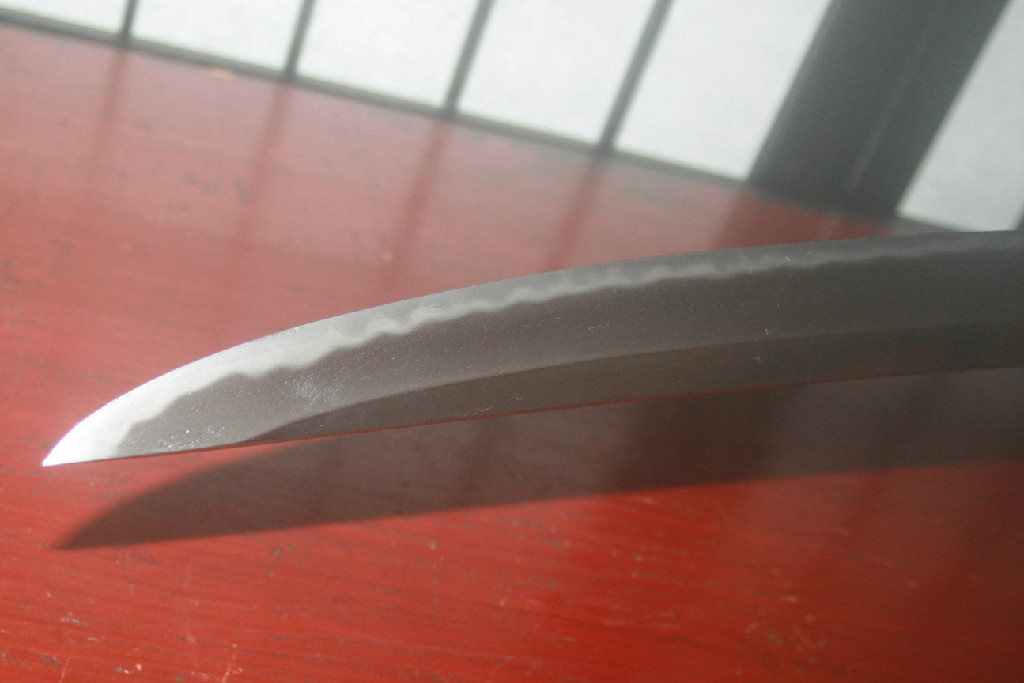 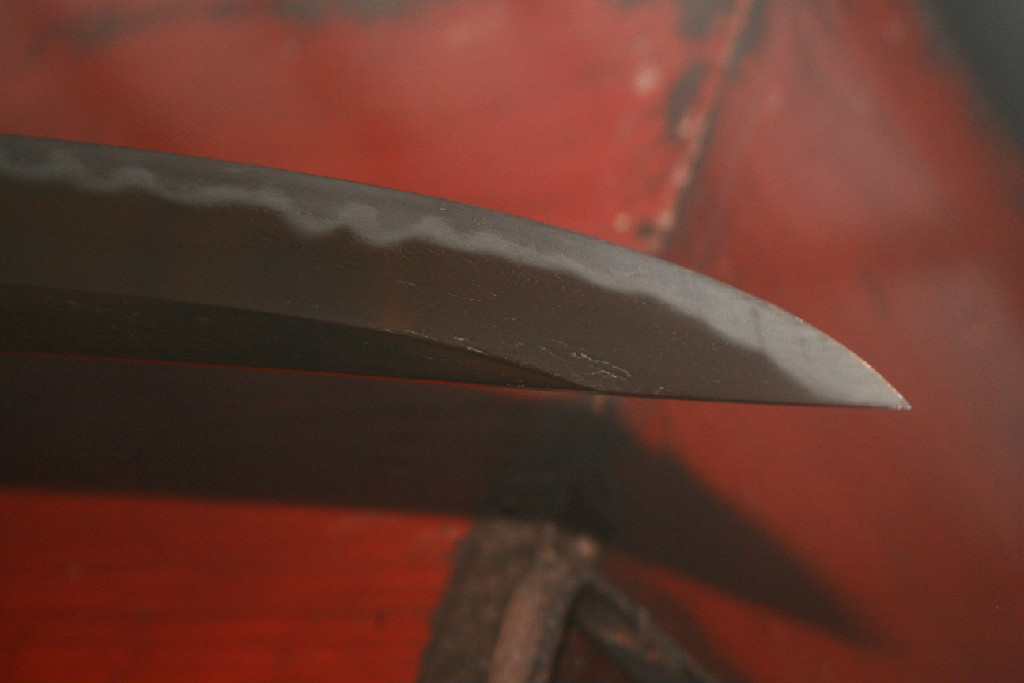 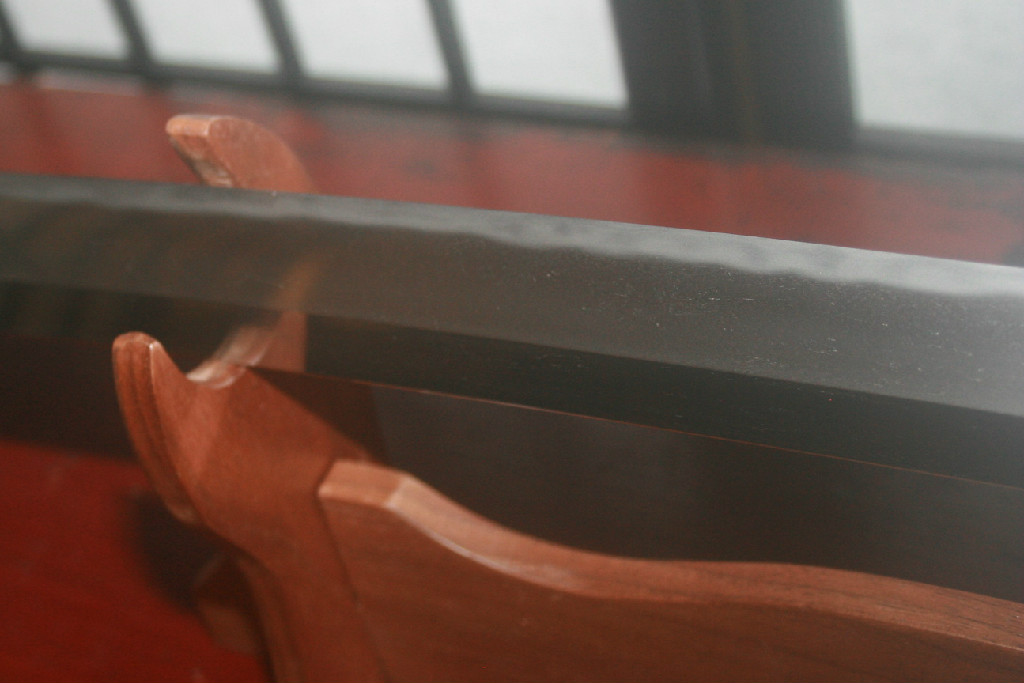 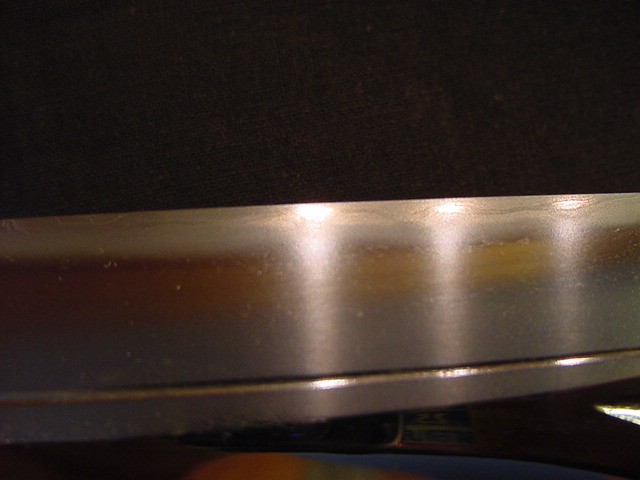 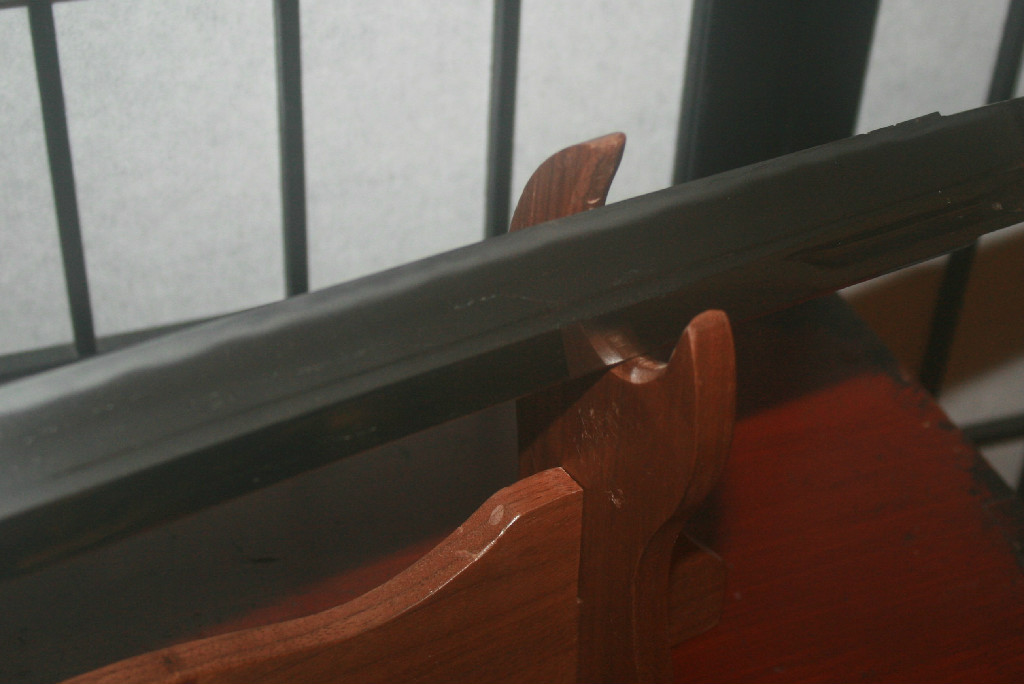 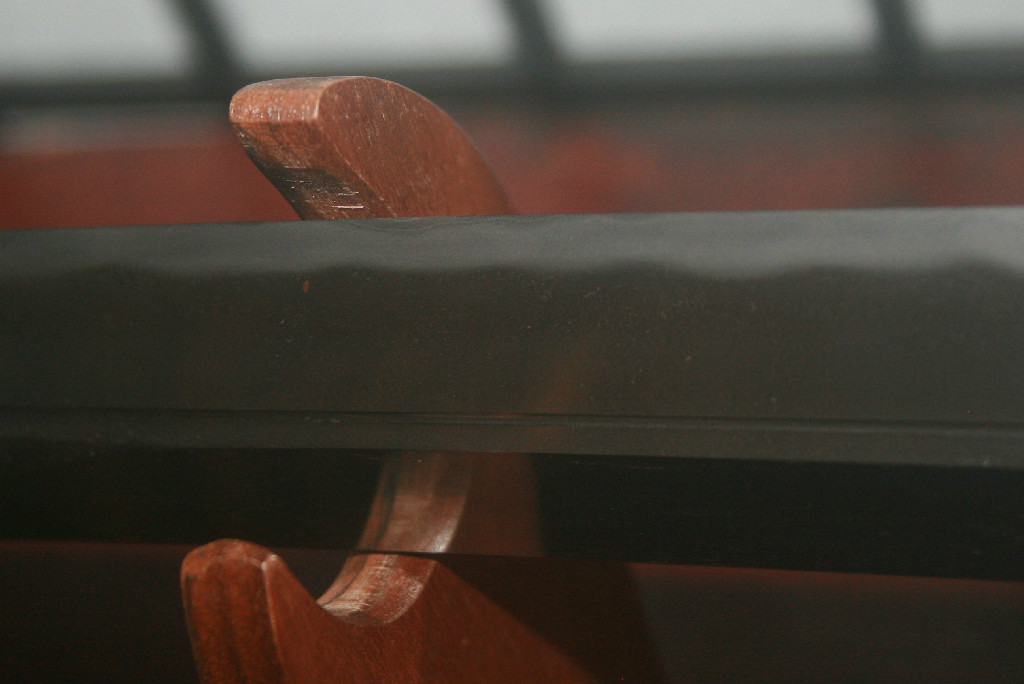 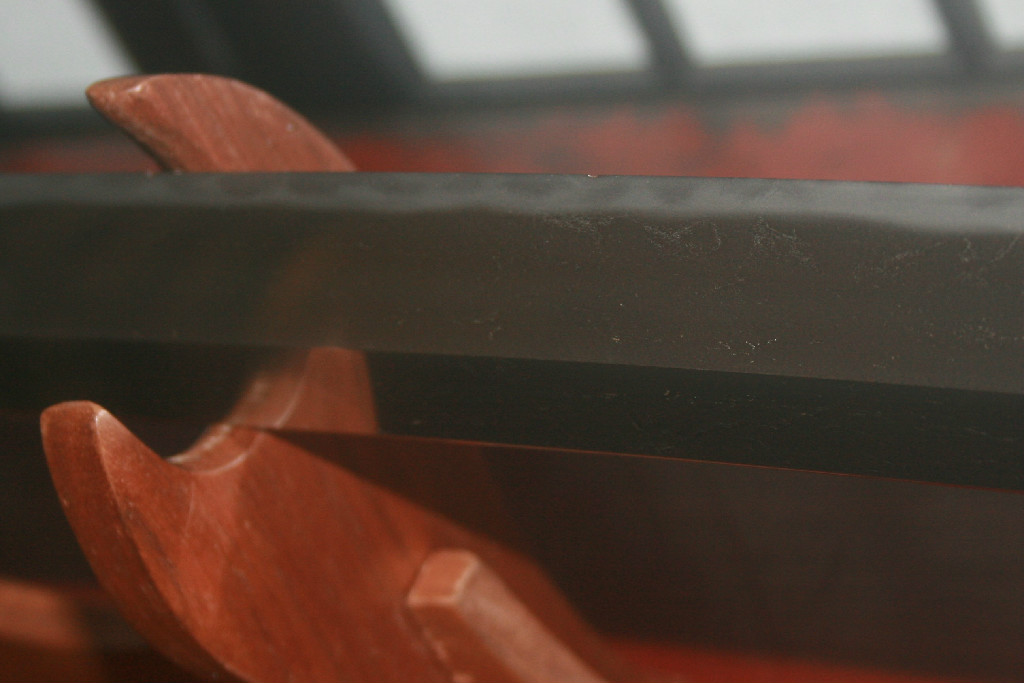 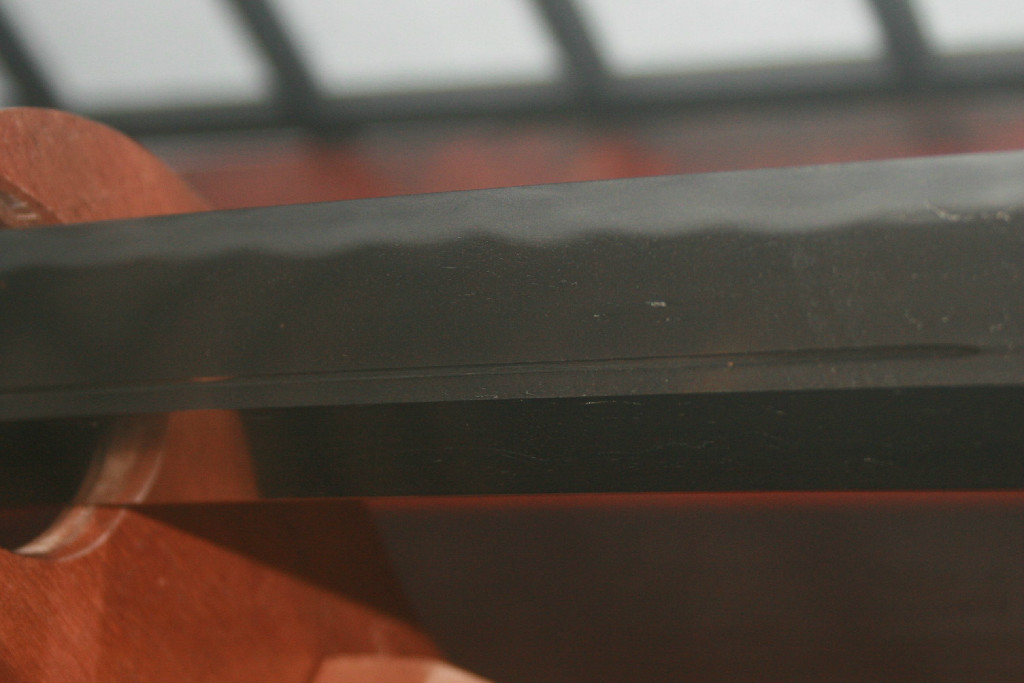 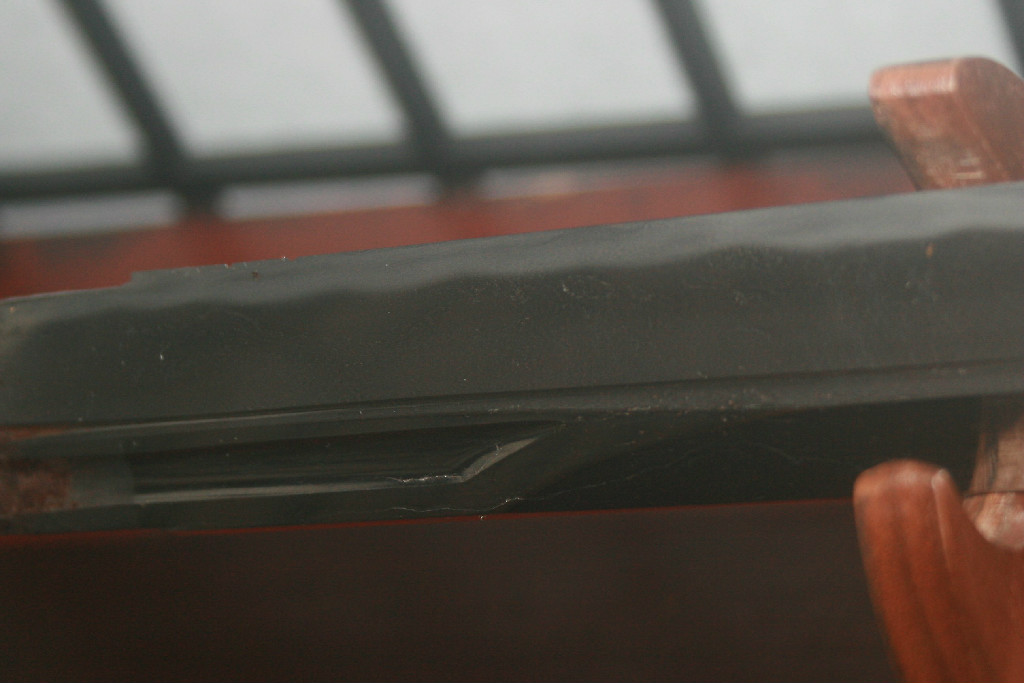 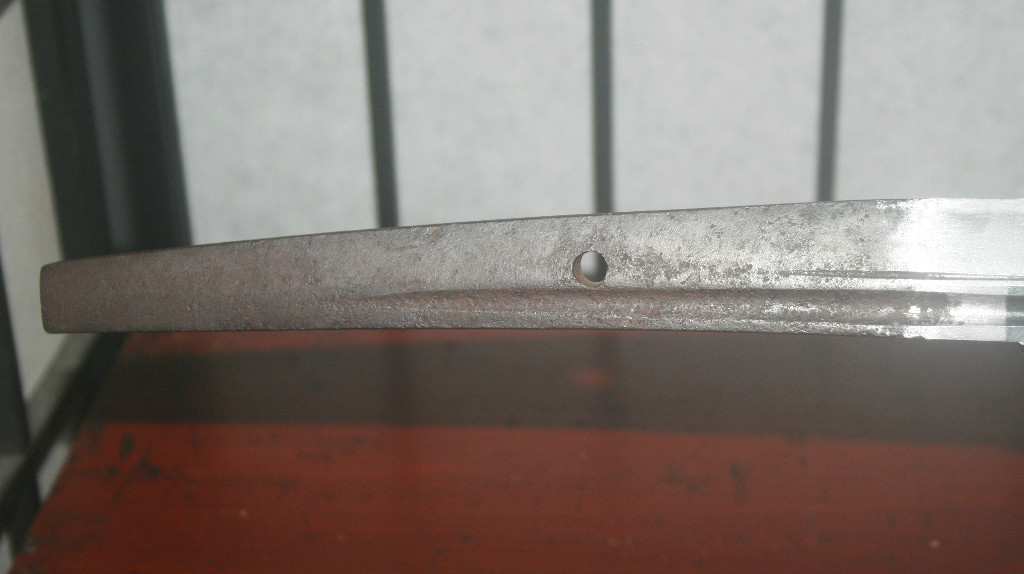